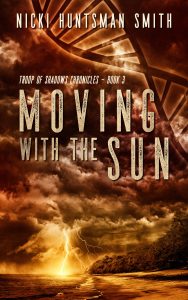 You’re one of the lucky ones – you lived through the global pandemic that eradicated seven billion people. You survived civilization’s collapse and the unspeakable atrocities committed by desperate people.

So are two intriguing groups of survivors living in close proximity on the Florida coast. The first, a harmonious community of highly intelligent people who reside on a former island paradise; they are determined to create sustainable quality of life. The other, camping in a Costco warehouse on the nearby mainland, a ruthless tribe of organized raiders who will stop at nothing to provide for their own.

Not only must they endure hardships and hunger in their ravaged world, fate seems hell bent to crush them all as a monster hurricane seethes in the Atlantic.

Fans of Stephen King’s “The Stand” will love these novels. Intricately plotted, superbly paced, and brought to life by fully-developed protagonists, quirky supporting characters (some you will recognize from the previous books), and charming villains, the Troop of Shadows Chronicles is a tour de force. It is the unfolding story of the greatest threat humanity has ever faced, and is populated with some of the most entertaining people you will ever meet.

Moving with the Sun – Available on Amazon now

We use cookies on our website to give you the most relevant experience by remembering your preferences and repeat visits. By clicking “Accept”, you consent to the use of ALL the cookies.
Cookie settingsACCEPT
Manage consent

This website uses cookies to improve your experience while you navigate through the website. Out of these, the cookies that are categorized as necessary are stored on your browser as they are essential for the working of basic functionalities of the website. We also use third-party cookies that help us analyze and understand how you use this website. These cookies will be stored in your browser only with your consent. You also have the option to opt-out of these cookies. But opting out of some of these cookies may affect your browsing experience.
Necessary Always Enabled
Necessary cookies are absolutely essential for the website to function properly. This category only includes cookies that ensures basic functionalities and security features of the website. These cookies do not store any personal information.
Non-necessary
Any cookies that may not be particularly necessary for the website to function and is used specifically to collect user personal data via analytics, ads, other embedded contents are termed as non-necessary cookies. It is mandatory to procure user consent prior to running these cookies on your website.
SAVE & ACCEPT